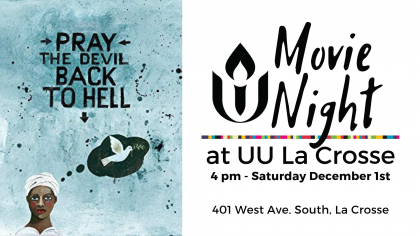 Our theme for December is peace; and we are showing a powerful movie of brave and visionary women who demanded peace for Liberia, a nation torn to shreds by decades old civil war. Desmond Tutu, said this film “eloquently captures the power each of us innately has within our souls to make this work a far better, safer, and more peaceful place.” The film reconstructs the way the tragedy of war and thousands or dead or displaced people, galvanized a coalition of Christian and Muslim women to rise up and, through nonviolent tactics, put pressure on their government to pursue peace talks. Join us on Saturday December 1, 4 pm for a great film, fantastic company, popcorn and your choice of seats.